Music and Neuroscience: Models for Collaboration 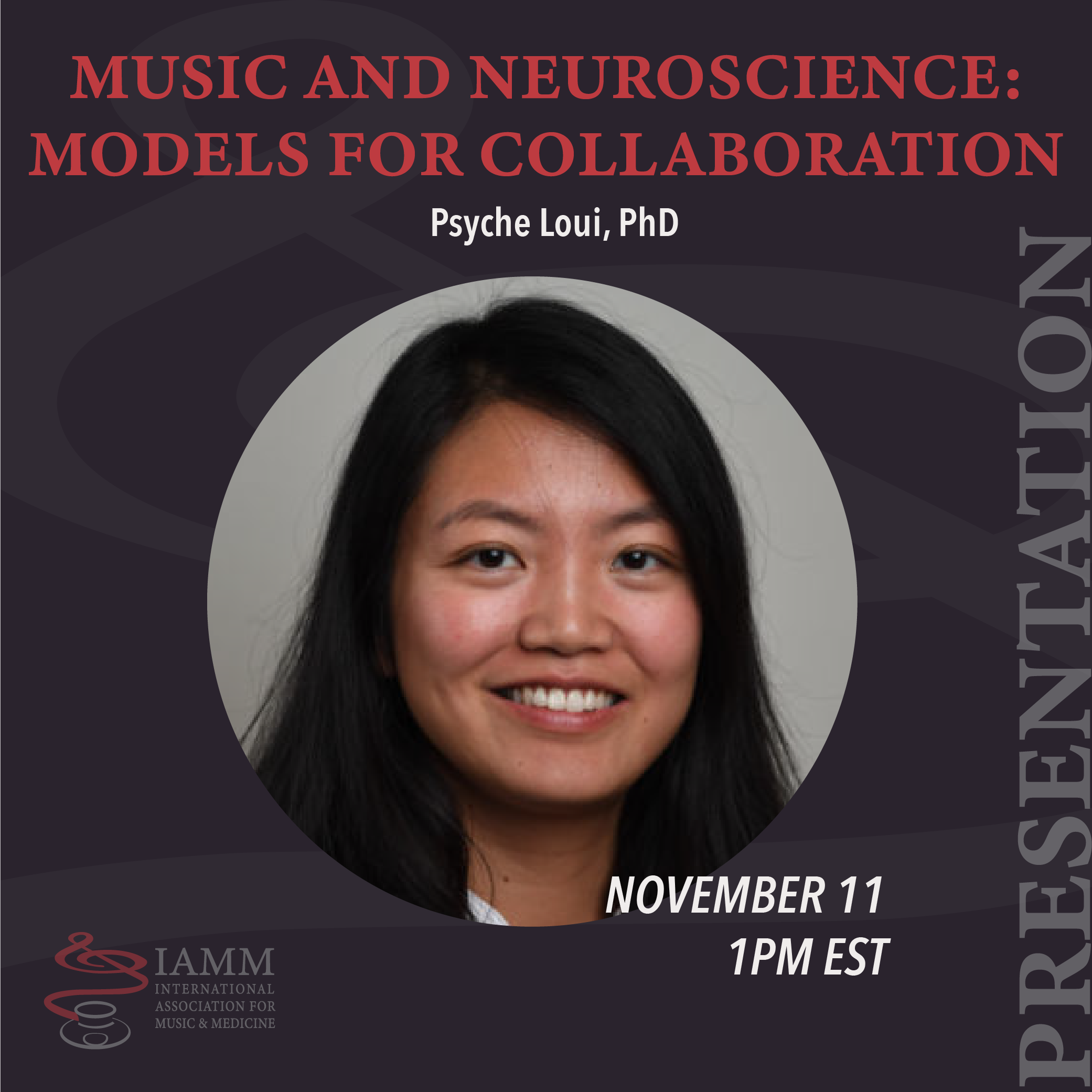 Dr. Loui will report on recent collaborative efforts between neuroscientists and practitioners of music and medicine. These include using neuroscience tools to understand how music may help in relieving stress and loneliness especially during the Covid-19 pandemic, as well as multi-lab collaborative efforts to improve open science practices, especially as they apply to sharing neuroscience data recorded during the experience of music. By highlighting several interdisciplinary collaborations between neuroscience and music laboratories, the hope is to galvanize interest and awareness of opportunities for collaborations between labs and practitioners interested in music and medicine, as part of IAMM’s Task Force on Music & Neuroscience.

The neuroscience of music cognition, musical perception, pitch problems, singing, tone-deafness, music disorders and emotional impact of music and the voice, comprise much of Psyche Loui’s research and work. What happens in the brain when we create music? What gives some people a chill when they are moved by music? Can music be used to help with psychiatric and neurological disorders? These are questions that Loui tackles in the lab. Director of the MIND Lab (Music, Imaging and Neural Dynamics) at Northeastern University, Loui has published in the journals Current Biology, Journal of Neuroscience, Journal of Cognitive Neuroscience, NeuroImage, Frontiers in Psychology, Current Neurology and Neuroscience Reports, Music Perception, Annuals of the New York Academy of Sciences, and others. For her research on music and the brain, Loui has been interviewed by the Associated Press, CNN, WNYC, the Boston Globe, BBC Radio 4, NBC news and CBS radio, and the Scientist magazine.  Loui graduated the University of California, Berkeley with her PhD in Psychology (Specialization: Cognition, Brain and Behavior) and attended Duke University as an undergraduate graduating with degrees in Psychology and Music and a certificate in Neuroscience. She has since held faculty positions in Psychology, Neuroscience, and Integrative Sciences at Wesleyan University, and in Neurology at the Beth Israel Deaconess Medical Center and Harvard Medical School. She currently chairs IAMM’s Task Force on Music & Neuroscience.

Register for this FREE workshop here:

Access to the recording of this discussion is no longer available for free. You can consider purchasing access to all of IAMM2020 offerings, including this presentation plus 13 keynote presentations, 8 Special Interest Group webinars, over 50 paper and poster presentations and more, here.

You can also consider becoming a member of IAMM to get access to more events like this one.

If you have any problems with the video above or the website in general, send us an email at sgracida@iammonline.com.

This content is only available for IAMM2020 registrants! You can log in to view the content, access the concert videos for free, or register to access all of IAMM2020 recordings, including 13 keynote presentations, 8 Special Interest Group webinar recordings, over 50 papers/posters and a new series of webinars, "IAMM Insights."