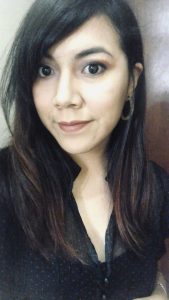 Bio: She is a peruvian with a Bachelor of Music with mention in singing, graduated from “Carlos Valderrama” Conservatory in Trujillo, Perú; she joined the Cast of Passion for Talent in 2012, attending classes with prestigious ISA’s teachers from the Teatro Colón (Argentina), she has participated in different recitals in Trujillo, as well as Lima, both as a soloist and in choral groups.

In 2017, she traveled to Barcelona to study a Master’s degree in Music Therapy at the Universitat de Barcelona, with the President of the Republic Scholarship, awarded by Peru.

She did her Music Therapy interships with different populations, in entities such as: the Catalan Parkinson’s Association, Sant Joan de Déu Serveis Sociosanitaris with Alzheimer’s patients, Escola Moragas and the Institut Catalá de Musicoterapia with children and teenagers with different diagnoses such as autism, Down syndrome, Rett, Rubenstain, among others; as well as the Hospital “Centre Forum of the Consorci Mar Parc de Salut in Barcelona”, where she developed Master’s degree thesis, which was approved with the maximum score.

In 2018 she participated in the “5th International Conference of the International Association for Music and Medicine”, and did the “The Ronnie Gardiner Method” course.

The same year she did the “MATADOC – 1st Level” Training by Wendy Magee, and developed a research tool and musical interface to use on stroke patients in rehab, with the support and help of other tutors and collaborators.

Finally, in 2019 she returned to Peru, after successfully completing her Master’s degree with honors.
Nowadays she works as a Music Therapist in her country.

Title: Development of a Music-Based Assessment Tool for Cognitive Functions and Music-Cognition in Adults with Acquired Brain Injury (ECMUS): A Pilot-Validation Study